In an article about the upcoming Multicultural Conference for Women, the Gladstone Observer has told it readers

High profile speakers Ronit Baras and Ahmad Abughazaleh from Together for Humanity will engage participants with a presentation that provides opportunities to learn about diversity and commonality and questions assumptions about identity.

Replacing prejudice (largely religious and cultural) with mutual respect and co-operation is a major theme in their presentation.

Read the rest of the article…

If you live in or around Gladstone, QLD, especially of you are a woman, come and join me and other speakers in a very special event on 5 August 2011.

Here is the description from the site of the organizers, WIN: Women’s Intercultural Network:

Offering a series of workshops and presentations by high profile speakers and educators in the fields of community cohesion and diversity. Participants are expected to gain a better understanding on issues related to maximising the benefits and dealing with the challenges of diversity including but not limited to topics such as prejudice, conflict resolution and community involvement and cohesion.

I am in the newspaper!

When politicians like MP Shayne Neumann are involved, the media becomes interested in what happens. This week, I ran a cultural diversity workshop for various organisations in Ipswich on with my colleagues from Together for Humanity and the event was captured by a quick reporter.

A JEW, a Muslim and a Christian came together to lead discussion in Ipswich yesterday about learning to live with differences of belief.

In the audience were more than 40 educators and community workers – police, school teachers, advocates for refugees, Red Cross and council representatives –who deal daily with religious diversity.

The first “diversity” workshop at Ipswich’s Civic Centre was put on by Together for Humanity, an Australian organisation set up in 2002 to promote understanding and tolerance.

The thought of making a difference first hit me when I was 16. Before that, I was a bit numb. I do not really remember thinking about others much. I was in a world of my own, trying to survive the troubles of the day, schooling and fighting with my parents. You know, those regular things teens go though and consider the end of the world.

When I was 16, I became a very good student and experienced success and comfort. Suddenly, I realized there were others around me who were much less fortunate. It was funny how four months in my life had changed my perception so much. In 10th Grade, everything was tough, I thought my life was horrible and I did not manage very well. I envied everyone around me, convinced their lives were easy and fun.

But in 11th Grade, a month after school started, everything changed. I realized I was a very lucky girl. I started writing poetry, joined the junior school council and was even chosen to be one of the teens going to Egypt as the first youth delegation after the peace treaty was signed between Israel and Egypt.

From a needy student with lots of problem, I became a leader and organized many events to bring people together and help those with fewer friends and lower academic abilities. Because I had been on the other side, it was easy for me to understand those who did not succeed.

In my Year Book, I wrote I would like to be a journalist and my favorite song was “Imagine” by John Lennon. I had John Lennon’s song posted on the door of my wardrobe and I thought that one day I would make it a reality.

My poetry was in protest of injustice and in search of love. From there, going to study Special Education was a natural progression. Evidently, making a difference was a major value for me.

Everything was clear until I got some exposure to Buddhism. That made the ideas of “change” and “making a difference” seem somewhat problematic. Why change? Why not accept what is and let go of the desire to change? But later, as I grew, I understood that acceptance does not mean compromise and that kindness is still the key to making a difference and making this world a better place.

It is funny how things turn out.

END_OF_DOCUMENT_TOKEN_TO_BE_REPLACED

Mr. Derek Brady, principal of Upper Mount Gravatt State School says having a life coach attached to his school to deliver professional development and parenting workshops has been instrumental in his school’s excellent performance.  Mr. Brady’s school has won the 2010 QUT Showcase Award for Excellence in Leadership for its ‘Healthy Minds, Healthy Bodies, Healthy Spirits’ program, in which the wellbeing of the entire school community is addressed, including teachers, non-teaching staff, parents and students.

With the guidance of the Kids Matter government initiative and by engaging Ronit Baras, a Brisbane-based life coach, Upper Mount Gravatt State School has already had 100% of staff trained in the ‘Be Happy in LIFE’ coaching program and 60 parents trained in the ‘Happy Parents Raise Happy Kids’ parenting program.

‘That has a huge impact’, says Mr. Brady, ‘Because it creates a common language everyone can use at the school and the “spin-offs”.  This is helping with the kids’ wellbeing and, ultimately, with their learning outcomes’.

One of the main things Mr. Brady has seen is a big improvement in the children’s behaviour.  ‘We haven’t had a suspension in 4 years’, he says proudly, ‘There’s no Detention room, there is a real happiness around the school and the kids are really vibrant’.

END_OF_DOCUMENT_TOKEN_TO_BE_REPLACED

I just got this feedback letter:

Our very sincere thanks for your wonderful presentation at our recent Annual General Meeting, on the topic: ‘Helping Children and Young People Address Racism and Prejudice’.

We always try to have at our AGM a speaker who will challenge and stretch our ideas about the way we, as a small interfaith women’s association, can fulfil our aspiration towards building a culture of peace.  Issues of racism and prejudice are at the heart of this challenge.

Your presentation about the Together for Humanity project, and in particular the findings from your surveys of children and young people, as well as descriptions of some of the processes you use in your transformational work, was a truly engaging experience for all those present.   This was evident from the high degree of participation throughout, in questions and comments to yourself and the general discussion which the ideas provoked.

My own hope is that some of our members may have been motivated by your presentation to volunteer for the Together for Humanity project should the opportunity arise.  We look forward to continuing contact with you and your important work.

Wendy Flannery
Coordinator
Believing Women for a Culture of Peace

I just wanted to share with you some feedback I received from one of my recent parenting workshops. One of them is of particular interest, because he is … a man! Men are rare in parenting workshops, but this one had a few and they were really happy they came.

Everything was useful. Ronit’s stories and humour make the course fun for me. The examples were excellent and the atmosphere was great. Ronit was fantastic. Great lady and with loads of information to help me.

[The workshop] makes you take a step back and look at how you deal with things at home and with yourself. It taught me to believe in myself to help me make the changes to become a better parent and that is also going to help me become a better person.

I found it enlightening. Work on being happy and the kids will follow. The pink elephants, the wolves, communication styles, positive expectations and self-motivating behaviour with practical, real-life examples, have given me a new and positive perspective on parenting.

Ronit’s style was informal and friendly. [She is] easily understood and has the ability to keep all participants interested and involved without being intrusive. The examples were very good and practical. Although I am more visual than auditory, I could have kept listening for much longer. She could respond easily to the participants and keep things moving.

I believe that this Better Parenting Program is exceptional and inspiration in “opening the door” to being a better parent and a happier person with simple and easy to understand techniques that cannot fail to make parenting easier and family life better. Children who grow up in a family that applies this way of thinking must be at an advantage.

I was honoured to coach A. C. and Bruce and I am honoured by their feedback.

If you want to get the same for yourself, ask your school principal or Parents and Friends association to book my Better Parenting Skills workshop.

Were you inspired by the video clips of Irene and her new parenting skills after she attended my Better Parenting Skills workshop? Well, here is the final part of Irene’s story, with a message for fathers at the end.

Since we all take our first parenting steps with our first child, most of us make the most parenting mistakes with that child too. In that case, Irene’s experience should seem very familiar and now, she knows what to do about it!

I believe that fathers are as important to their kids as mothers are, especially for boys. Many men find it more difficult to learn parenting, which is why many of my workshops have an overwhelming female majority, but this has to change!

Girls, show your husbands Irene’s video testimonials, especially this one, and ask them to come along to learn parenting. Fathers who have attended have gotten wonderfully close to their kids and are truly happy they have come.

Book this great workshop for your own school or organization. 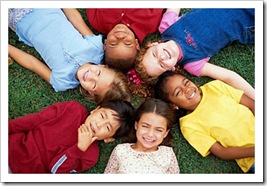 Yesterday, I went to give a presentation at Griffith University for International Peace Day 2009. I talked about the foundation I coordinate in Queensland (Together for Humanity) and the important work we do with kids to ensure they do not grow up to be racist adults.

As part of the discussion, I gave very sad statistics about kids’ attitude towards different races and talked to the audience about the negative influence of the media and the kids’ parents at home.

At the end of the evening, a dark Indian woman thanked me for the talk and said it was alarming to see the figures on the screen.

As you probably know by now, I love stories and after you read this, you will know why I wanted to pass this story on to you.

“I’m from Indian and I’m married to a Scottish man. Recently, our 3-years-old daughter’s birthday was coming. She said she wanted to invite friends from her day care center home, ‘But I don’t want to invite boys or blacks’, she said. I was very shocked. I’m as black as can be and always thought that because my husband has fair skin and comes from a different culture to mine, we are the perfect example of living in cultural harmony. I never thought my own daughter would say something like that”, she told me.

“Two days later, I asked her ‘Who did you invite for your birthday?’ and she said she’d invited a boy who is her best friend and a black girl who is a good friend”.

I thought that was brilliant! What would you do?

Remember Irene and her exciting new parenting skills after she attended my Better Parenting Skills workshop?

Well, last time, Irene told us how she managed to use her new knowledge of communication styles and love languages to get closer to her son. This time, she is talking about one of her daughters.

Book this great workshop for your own school or organization.